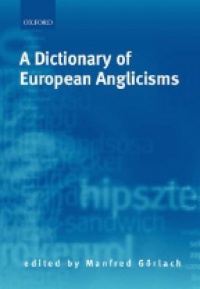 A Dictionary of European Anglicisms

A Dictionary of European Anglicisms documents the spread of English in Europe. It provides the first exhaustive and up-to-date account of British and American English words that have been imported into the main languages of Europe. English, which imported thousands of words from French and Latin (mainly after 1066), is now by far the world's biggest lexical exporter, and the trade is growing as English continues to dominate various fields ranging from pop music to electronic communication. Several countries have monitored the inflow of anglicisms and some have tried to block it. But language, as lexicographers have always found and as this book demonstrates once more, respects neither boundary nor law. The dictionary not only shows which words have been exported where, but how the process of importation can change a word's form and function, sometimes subtly, at others remarkably as in the transformation of painkiller to Bulgarian 'jack of all trades'. The book provides a systematic description of the lexical input of English into Icelandic, Norwegian, Dutch, German, Russian, Polish, Croatian, Bulgarian, French, Spanish, Italian, Romanian, Finnish, Hungarian, Albanian, and Greek. Each entry has a brief definition of the loan word, followed by information on its history and distribution; variations in its spelling, meaning, and pronunciation; its route of transmission if not direct from English; its degree of acceptance and usage restrictions; and its native equivalents and derivatives. Grids showing distribution patterns across Europe accompany many of the entries. The Dictionary of European Anglicisms is a scholarly tour de force [French: imported early nineteenth century] and the result of a prodigious research effort across Europe masterminded and directed by Manfred Gorlach. It is a unique resource for comparative analysis and the study of linguistic variation and change. It will fascinate linguists and word-watchers of all persuasions.