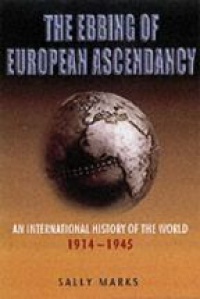 The Ebbing of European Ascendancy

An incisive and insightful survey of global politics in the first half of the twentieth century.

In three decades between 1914 and 1945, the European great powers ceased to dominate the globe. In their place, the United States, primarily a regional power in 1914, became a 'super power' along with the half-Asian USSR. What had happened in this short period to work such dramatic change?

Although the two great wars played a large role, the answer does not lie entirely in Europe alone or in the West more broadly, and one of the novelties and virtues of this bold new international history is that Africa, Asia, the Middle East and Latin America are allowed to play their parts. It examines the interconnection of events on different continents, as world leaders were forced to do. The Asian and European crises and wars of 1931-45, for instance, are viewed as a single interlocking whole. It also acknowledges to an unusual degree the importance of imperial and economic circumstances in framing the policies of stars toward one another.

Few ordinary Westerners foresaw in 1941 the kind of place the world would soon become. But even as the Wehrmacht headed for Moscow and the Japanese bombed an American fleet in Pearl Harbor, numerous developments since 1914 constituted compelling evidence that Europe's long global pre-eminence was ending. The Second World War accelerated the final stages in the transition but, as Sally Marks's elegant and lively account makes clear, the ebbing of European ascendancy had begun long before ...and often far away from Europe itself.