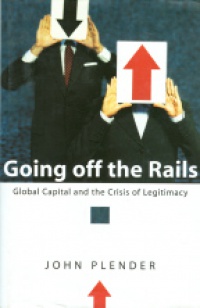 Going off the Rails Global Capital and the Crisis of Legitimacy

In this thought-provoking work, writer and journalist John Plender explores the model of capitalism advocated by English-speaking countries and asks the following pertinent questions:

*Why are developing countries financing the world's richest economy, instead of the other way round?
*How have the markets come to appear so unstable?
*What is causing the erosion of the wealth creation process? and
*Is the conventional view of this model actually correct?

The capitalist model was developed in the 19th century and recent events have shown the difficulties of adapting this to the demands of the 21st century, in which human and social capital are of far greater importance than physical capital. In Going off the Rails, John Plender shows how corporate scandals, inflated boardroom pay, corporate governance disciplines and outmoded accountancy conventions have stretched the Anglo-American model to its limit and what the effects of this might be on globalisation and the capital markets.