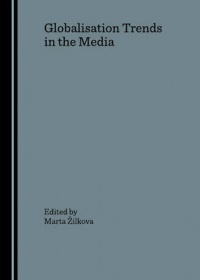 Globalisation Trends in the Media

Pridať do wishlistu
Späť Tlačiť
Kúpiť
The book of studies named Globalisation Trends in the Media contains an evaluation of the media culture in Slovakia. It deals with problems caused by globalisation and by the specific circumstances of media production. Whilst the post socialist states are, in many respects, in a similar situation, they each have their own specific attributes too. As this book features not only Slovak, but also Czech and Polish authors, the English reader will be able to gain an idea of the state of media production, and especially of the media culture, in Central Europe. The nature of media culture in Central Europe, when compared to that of countries situated further east, differs mainly in its inclination towards western Europe and, unfortunately, towards America too. The book contains theoretical and glozing articles dealing with radio and television production, as well as the Internet. Overall the book aims to introduce the reader to the state of the Slovak media culture, to its audience and also to its problems and successes since the year 1989.

The book will probably attract the attention of experts in media production, academics of media culture and young people interested in radio and television production who would like to learn something about the culture of a small Central European country. They might have come across a similar phenomena in England. The book will help them find out how European culture influences Slovakia.