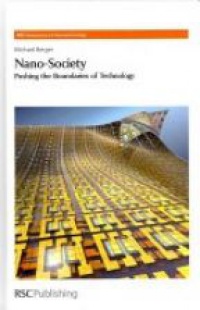 Nano-Society: Pushing the Boundaries of Technology

Pridať do wishlistu
Späť Tlačiť
Kúpiť
Major technology shifts do not happen overnight and rarely are they the result of a single breakthrough discovery. Nowhere is this more true than for the broad set of enabling technologies that we have come to simply call "nanotechnology". Rather than standing on the shoulders of a few intellectual giants, nanotechnologies are created by tens of thousands of researchers and scientists working on minute and sometimes arcane aspects of their fields of expertise in areas as diverse as medicine, telecommunications, solar cells, filtration, coatings, or ever smaller transistors for electronic devices. They come from different sciences, live in different parts of the world and work for different organizations (government laboratories, industry laboratories, universities, private research facilities) and follow their own set of rules - get papers reviewed and published; achieve scientific recognition from their peers; struggle to get funding for new ideas; look to make that breakthrough discovery that leads to the ultimate resumÚ item - a nobel prize; get pushed by their funders to secure patent rights and commercialize new discoveries. This book puts a spotlight on some of the scientists who are pushing the boundaries of technology and it gives examples of their work and how they are advancing knowledge one little step at a time. The book shatters the monolithic term "nanotechnology" into the myriad of facets that it really is. It is a journey through the world of nanotechnology research and development, taking a personal look at how nanotechnologies get created today and by whom. The book covers 122 specific research projects that are happening in laboratories around the world and provides commentaries from the scientists in their own words. However, the collection of stories in this book barely scratches the surface of the vast and growing body of research that leads us into the nanotechnology age. The selection presented in the book is not meant to rank some laboratories and scientists higher than others, nor to imply that the work introduced in the book is more important or valuable than all the work that is not covered. The intention is to give the interested reader an idea of the incredibly diverse aspects that make up nanotechnology research and development - the results of which will bring about a new era of industrial and medical technologies. Nanoscience and nanotechnology research is a truly multidisciplinary and international effort. Each of the chapters is based on a particular scientific paper that has been published in a peer-reviewed journal and, while each story revolves around one or two scientists who were interviewed for this book, many, if not most, of the scientific accomplishments covered in the book are the result of collaborative efforts by several scientists and research groups, often from different organizations and from different countries. The book is different to other books in this field because it provides a novel human touch to nanotechnology research by not only covering a wide range of research topics but also the (often nameless) scientists behind this research. The book is a collection of Spotlight articles from the popular Nanowerk website and each article has been crafted with the author(s) of a scientific paper and signed off by them prior to being posted on Nanowerk. The book is intended for two broad groups of audiences - scientists and nanoscience students who want a bite-size, quick read to get a good first impression of what nanotechnologies are about and how they affect not only their own field but also neighbouring fields and other scientific disciplines further away. And a non-scientific readership that needs to (because it affects their organization and they have to acquaint themselves with nanotechnology) or wants to get a 'non-threatening' (i.e. no formulas, complex diagrams, or unexplained scientific terms) introduction, written by a non-scientist for non-scientists.