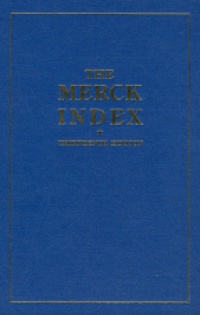 The Thirteenth edition of The Merck Index continues the tradition of publishing a concise, authoritative reference work designed primarily to serve the needs of chemists, biochemists, pharmacists and those in retated professions. The information is assembled with today' s need for quick reference in mind, but the commitment to excellence in scientific scholarship and to enhancing scientific communication remains paramount. This edition contains a diverse collection of over 10,000 monographs. More than 4,000 monographs are devoted to a wide variety of drugs and pharmaceuticals, over 2,000 describe common organic chemical s and laboratory reagents, and another 2,000 cover naturally occurring substances and plants. A~ additional 1,000 monographs focus on the elements and on inorganic chemicais. Almosť 1;000 pertain to compounds of agricultural significance, and several hunqred describe endogenous substances and biological agents. A number of changes have been made since the Twelfth Edition. The monograph section has been extensively revised and updated. In response to requests from our readership, the Chemical Abstracts Registry Numbers for title and derivative compounds have been embedded within the monographs. The derivative compound data presentation now mirrors the title compound such that registry numbers, molecuiar weights and literature reference s are included in addition to names and physical properties as in previous editions. Patent data has been reformatted using the two letter international country codes. The section on Organic Name Reactions p.as been updated and tevised; further, the schema have been standardized. The Miscellaneous Table section has been redesigned and reordered to enhance access to the ancillary monograph information. To facilitate the use of the information in the electronic age, The Merck Index will be expanding its electronic offerings from THE MERCK INDEX ON LINESM, and THE MERCK INDEX on CD-ROM to include aW eb-accessible format. The latter two formats will be both text and structure searchable. Additionally, information that we are unable to maintain in print due to si ze restrictions will appear as part of the electronic versions. Changes in size, scope and publishing mechanisms have been made with each edition to keep pace with the progress in science and information tech nologies in order to accommodate the diverse interests of an ever-broadening and sophisticated readership. In this environment, it is especially gratifying that so many still refer to The Merck Index on a daily basis. We hope t~at this edition, published byMerck & Co., Inc., as a service to the scientific community and the public, will prove to be a valuable resource to all.