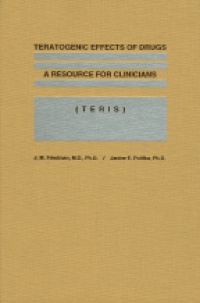 Teratogenic Effects of Drugs A Resource for Clinicians

This book is derived from the TERIS database, an electronic resource that was originally developed under a grant from the U.S. Public Health Service Bureau of Maternal and Child Health. Additional financial support for the development of TERIS was provided by the Department of Pediatrics and the School of Medicine at the University of Washington. We wish to thank the members of the TERIS Advisory Board, Drs. Robert Brent, Jose Cordero, James Hanson, Richard Miller, and Thomas Shepard, for their invaluable expertise in assessing the teratogenic risks associated with the agents discussed in this book. Our summaries could not have been developed without their advice and support. Dr. Bert Little served as Project Coordinator for TERIS during the first two years of its development. He helped write the initial summaries and design the database. Barbara Brownfield performed many of the bibliographic searches for TERIS and assisted in the preparation of this book. Her contributions are greatly valued. Dr. Gerald Barnett, of the University of Washington Office of Technology Transfer, generously provided his time and advice to further development of the TERIS project. We have enjoyed collaborating with him over the past four years and particularly appreciate his vision for the future of TERIS. Automation of the TERIS database was originally accomplished under the direction of William Singleton at the Medical Computing Resources Center of the University of Texas Southwestern Medical Center. For the past five years, the TERIS database has been maintained by Gerard Pence at the University of Washington's Locke Computer Center. We are grateful for his expertise, especially in times of crisis. A computer program was created by Delores Boldrin, who is also at the Locke Computer Center, which enabled a subset of synonyms to be selected for the book from the 38,000 chemical and trade name s currently on the system. Her program has greatly simplified this selection process, and we appreciate the time she spent in generating the seemingly endless lists of synonyms. We are indebted to Dr. Glen Cooper, of Glen Cooper & Associates Ltd., in Vancouver, B.C., for design ing a program that easily and efficiently converts the computerized database into printed output for the book. Dr. Cooper also developed the microcomputer version of TERIS, which has been in production since 1988. We also wish to thank Jenny Nakahara, Marci Ameluxen, Gail Provo, Cora Gluckhertz, Elizabeth Lustig, Margaret Carlisle, and Joby Isaac for the many hours they have invested in collecting and preparing material s for the TERIS database and this book. Finally, we wish to express special thanks to Tom Shepard for his friendship, support, and wisdom. He is the grandfather of this book.