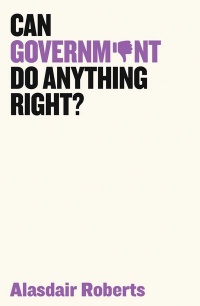 Can Government Do Anything Right?

Pridať do wishlistu
Späť Tlačiť
Kúpiť
Across the Western world, people are angry about the inability of government to perform basic functions competently. With widespread evidence of policy failures at home and ill-conceived wars and interventions abroad, it is hardly surprising that politicians are distrusted and government is derided as a sprawling, wasteful mess. But what exactly is government supposed to do, and is the track record of Western governments really so awful?In this compelling book, leading scholar of public policy and management, Alasdair Roberts, explores what government does well and what it does badly. Political leaders, he explains, have always been obliged to wrestle with shifting circumstances and contending priorities, making the job of governing extraordinarily difficult. The performance of western democracies in recent decades is, admittedly, far from perfect but - as Roberts ably shows - it is also much better than you might think.